Introduction to the Remo language of the Bonda tribal community, Orissa

Remo, also known as Bonda, Bondo, and Bondo/Nanga Poroja, and in Remo itself as remosam or remsam, has several thousand speakers who represent the Bonda (Bondo) tribe of Malkangiri district, Orissa.

The Remo-speaking Bonda occupy the Jeypore Hills in southern Orissa, west of the Machkund river in Malkangiri district, centered around Mundlipada (Parkin 1991: 32). The Plains Remo are found primarily in 35 villages in Khairpat block of Malkangiri district. Gradual attrition to Desia has been occuring in some parts of the Remo (Bonda) area, thus Remo should now be considered an endangered language. School-age Bonda frequently use local Oriya in daily communication. Remo remains an unwritten language at present and this is likely to remain the case, as there is little community desire for this. We thus offer Remo forms here only in IPA transcription. 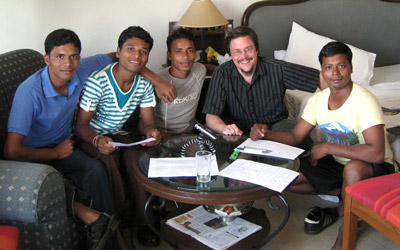 The Hill Bonda (Remo) people are one of the tribal groups in India that are most known for being different than ‘civilized’ Indian citizens, and have a reputation for ferocity of character (Elwin 1950). They are organized into exogamous patrilineal clans typically named for villages, and, at a superordinate level, into two moieties, tiger (ontal) and cobra (kilo or kukusa) (Elwin 1950: 28-9). Boys and girls resided in segregated village dormitories, marriage was by mutual consent, not arranged, and it was not uncommon for older women to marry young boys (von Furer-Haimendorff 1943). The women traditionally shave their heads and wear only a cloth girdle and elaborate ornaments, enormous metal necklaces and earrings and bead strands that came down to the upper thigh. Such attire is still found among older and more traditional Hill Bonda today. The men wore loincloths, carried bows and arrows and reportedly would shoot each other (and outsiders) without qualm. Many Bonda men now wear the same kinds of attire found among Indians citizen across the country. Material culture still practiced includes fibre extraction and weaving, construction and use of ploughs, hoes, hatchets, mortars, pestles, nets, fish traps, baskets, bird snares, looms, stringed instruments and drums. They erect and venerate stone megaliths with offerings of rice, mangoes and sacrificed fowl (Elwin 1950). The Bonda remain popular attractions in the Indian ethno-tourist industry, particularly at a weekly market they attend when they come down the hills from their villages. 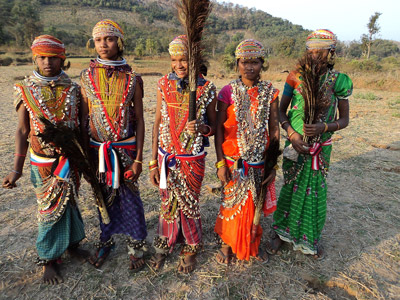 Remo is known mostly from a few sources, Fernandez (1968), some of which is published as (1983) from the Hill Remo (Muɳɖlipaɖa) dialect, Ramachandra Rao’s (1981) phonological materials, Swain’s phonological study (1980) and Bhattacharya’s (1968) brief text and more extensive lexical materials, which are mostly of the Plains Remo variety. The most recent published work on Remo is our sketch grammar (Anderson and Harrison 2008).

Data below comes from the published sources; multi-media data is from older (2005, 2007) and recent fieldwork (2010-2011) in Orissa on the Remo variety of Bondaguda village, Malkangiri district. The 2010-2011 fieldwork on Remo was funded under grant number BCS-0853877 from the National Science Foundation, under the auspices of the Documenting Endangered Languages program. This funding is gratefully acknowledged.

Remo’s only close relative in the South Munda family is Gutob, with which it forms the so-called Gutob-Remo sub-group. Zide (1965) suggests that Proto-Gutob-Remo formed a larger unit jointly with Gtaʔ in a Gutob-Remo-Gtaʔ node. An alternative proposal by Anderson (2001) suggests that Proto-Gutob-Remo may have several shared innovations that included Gtaʔ,[1] but may not form an actual genetic unit with it, thus forming a local linkage (South Munda in general appears to more of a linkage than a distinct genetic group per se, being more or less not the clearly definable North Munda. Remo and Gutob also share certain structural/typological (or possibly genetic?) features with Kharia as well–another open research question for the future. 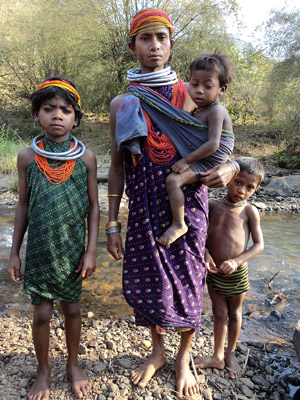 A Remo woman with children. Photo by Opino Gomango.

Adjective as a word class is more justifiable in Remo than it is in most other Munda languages. Adjectives may precede or follow nouns that they modify. When used attibutively they usually remain uninflected, and may occur without a copula in the positive present at least (although can appear with a copula as well in such contexts too).

The pig is big.

The pig is not big.

Adjectives may be morphologically marked by the modifier suffix –baj, a syllabic nasal prefix, N-, or both. Note that this includes numeral stems as well m-baʔar ‘two’ or  ŋ-giʔi ‘three’.

Note that –baj may attach to reduplicated verbal forms as well:

Some adjective stems must occur with a suffix in Remo, although these are often loans and copy with them some of the gender/number morphology from their Indo-Aryan source, as well as often taking the adjectival suffix- bay.  Such adjective stems include kan- ‘blind’, ur- ‘smart’, beɳɖ- ‘young’, ɖeŋg- ‘tall’, seroʔ- ‘dirty’, and rentem- ‘lean’.

In more complex phrases, the order is usually DEM/GEN Num Adj N. Examples of expanded adjectival modifier phrases include the following in Remo:

[1] Gtaʔ has many loans from Remo, which is an as yet unexplored topic.